A trek to see a group of Eastern Lowland gorillas in the jungles of Democratic Republic of Congo is remarkably one of the most thrilling adventures that come once in lifetime. The Eastern Lowland apes belong to one of the 2 (two) sub species of the eastern gorilla which lives within a few remaining tropical rain forests in Africa. It is common compared to other species and it features as one of the largest apes on earth. 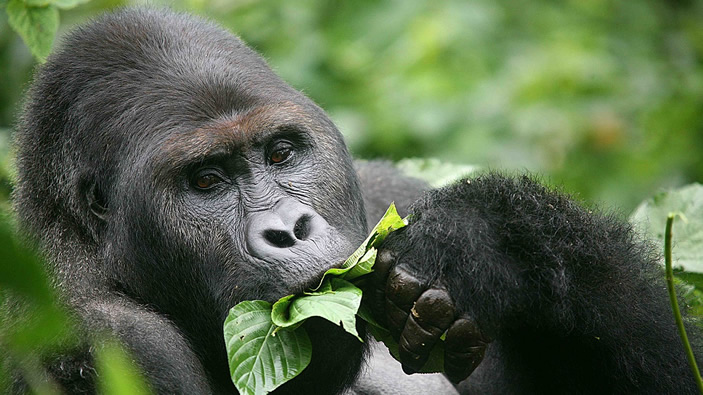 These remarkable apes thrive mainly around the tropical rain forests of eastern and central Africa together with lowland swamps and secondary forests. They tend to spend much of their time on trees and in the Democratic Republic of Congo, they are mainly found in the dense jungles of Kahuzi Biega National Park and Maiko National Park. They are known to be the 2 (two) distinct sub species of Eastern gorilla that makes up the Eastern Lowland (scientifically known as ‘Grauer’) and the rare mountain gorillas. The only slight difference lies in their physical appearance, the two species are also distinct from each other in terms of population.

The Eastern Lowland gorillas feature among the large primates, a family that comprises of gorillas, orang utans, humans and chimpanzees. They come with unique characteristics that make their survival in the forest a bit simpler including their opposable thumbs that come in handy when they are peeling fruits.

The Eastern Lowland gorillas are herbivorous. They depend on leaves, plants, stems, nuts and berries plus termites, ants, insects and at times small wildlife species like lizards and rodents. These rare species also tend to use basic tools in the natural habitat especially when it comes to gathering food stuff. Given their huge sizes, these primates have few real predators in the wild except the large cat family especially the leopards and the crocodiles. Habitat loss features as the major threat to the survival of these primates in the wild due to continued deforestation as well as hunting by humans. Most of the areas around their habitat territories have also been characterized by insecurities that in most cases come together with poaching.

They live in families of about 5 to 30 or beyond with a silverback gorilla or an alpha male being their dominant leader whose responsibilities are largely dependent on protecting the rest of the members in the family and also mate with females. Given habitat loss and continued poaching, these unique apes have become the endangered species with less than 5000 that are left on earth today.

They make new nests each day just like mountain gorillas and the babies can share with their mothers till they reach 3 years and above. The males weigh up to 250 kilograms and they can stand up to 2 meters tall.
Like mountain gorilla trekking, visitors on lowland gorilla trekking are also given only an hour to be with the apes, explore them while they feed and play with their babies. To track these primates, you can visit Kahuzi Biega National Park which is situated around Kivu province in the north or through the Ruzizi 1 border to the southwestern side of Rwanda.

In conclusion, for absolute great ape experiences never miss to pay a visit to Democratic Republic of Congo where you explore more about the eastern lowland and mountain gorillas. The country is located in central Africa with many UNESCO world Heritage sites such as Virunga National Park, Salonga National Park and Okapi Wildlife reserve among others. You can combine other adventures within Congo or even Uganda and Rwanda with gorilla safaris and you will have the most wonderful experiences of lifetime.