It should be noted this is a critically endangered species, visited by many tourists from allover the world for Uganda and Rwanda gorilla safaris and holiday. The total population of Mountain gorillas in the world now stands at a minimum of 880. The official result was released today (13th Nov 2012) by the Uganda Minister for Tourism, Wildlife, and Antiquities Hon. Maria Mutagamba alongside representatives of the Uganda Wildlife Authority. 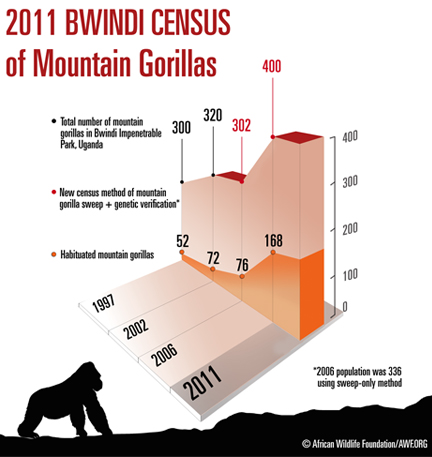 The increase in the Bwindi gorilla population since the last census is attributed to both population growth and improved censusing techniques of these rare and elusive apes. Despite mountain gorillas being among the most studied of the great apes, these latest results demonstrate the challenges of wildlife censusing. We continue to perfect these methods in order to improve our mountain gorilla conservation efforts in the future, said Craig Sholley, mountain gorilla expert and vice president for philanthropy and marketing at African Wildlife Foundation (AWF).

In this latest census of mountain gorillas in Uganda, teams systematically moved through the impenetrable forests of Bwindi National Park not once, but twice, looking for and documenting mountain gorilla night nests, and collecting fecal samples for genetic analysis. The first sweep was conducted with a small team from February 28 to September. 2, 2011; the second sweep was carried out with multiple teams from September. 10th to November. 3, 2011. With the genetic analysis, scientists were able to determine how many unique groups and individuals were found by the field census teams through both sweeps, in what is referred to as a modified mark recapture method.

In short, both sweeps of Bwindi forest enabled census teams to find more gorillas than a single sweep would have. Furthermore, it is likely that some gorillas were missed by field census teams in the 2006 census of mountain gorillas in Bwindi impenetrable forest. But all signs are that this population of mountain gorillas is indeed growing and this is a great hope for sustainable gorilla tourism development. Many visitors to Africa want to include Uganda gorilla safaris in their holiday packages.

“The newly applied methods of censusing give us the clearest image of the status of mountain gorillas in Bwindi National Park that we have yet had,” explained Maryke Gray, a census researcher with the International Gorilla Conservation Programme (IGCP), a coalition of AWF, Fauna and Flora International, and World Wide Fund for Nature. “Even with evolving census methods, the results indicate this population has indeed grown over the last 5 years, and that is according to Augustin Basabose, Virunga Heartland director for AWF and interim director of IGCP,

The mountain gorilla is the only great ape whose population is increasing despite continuous pressure on its habitat. This positive trend is due to the strong collaboration among the three countries where mountain gorillas live and the collective efforts on the ground by park staff, surrounding communities and local government, and non-governmental organizations.”

While Sarambwe Nature Reserve in the Democratic Republic of Congo, a protected area continuous with Bwindi and therefore potential habitat for mountain gorillas, was initially going to be included in the census, it was not possible to do so due to political insecurity in that area.

The 2011 gorilla census in Bwindi forest was conducted by the Uganda Wildlife Authority with support from l’Institut Congolais pour la Conservation de la Nature and the Rwanda Development Board (RDB). The census was also supported by AWF through IGCP, the Max Planck Institute for Evolutionary Anthropology, Conservation Through Public Health, the Mountain Gorilla Veterinary Project, the Institute for Tropical Forest Conservation, and the Dian Fossey Gorilla Fund International.

Great thanks to all partners in the conservation of Mountain gorillas in Africa, including neighboring communities to Bwindi national park (Gorilla habitat) where all gorilla safari activities are conducted.