Nyungwe Forest’s Nziza Project was announced the winner of the British Guild of Travel Writers’ Globe Award in recognition of its efforts to harmonize tourism, wildlife and the agricultural community in one of Africa’s last surviving rainforests. 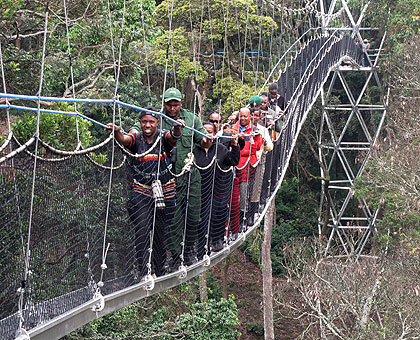 At an event held last weekend in London, United Kingdom, the project was lauded as exemplary and poised to develop and protect one of the world’s richest and most diverse ecosystems.

It should be noted that Rwanda is one of Africa’s tourism destinations and the major tourist activity is Mountain gorilla tracking in Volcanoes National Park. Nyungwe forest is home to 13 primate species that include chimpanzees, colobus monkeys, vervets, blue monkeys, Red-tailed monkeys, etc.

The project also came first during the awards’ Wider World category. The two runners-up were Georgia’s Borjomi-Kharagauli National Park and San Antonio Texas’s Morgan’s Wonderland. “We are delighted that the Rwanda Nziza Project was named winner of the prestigious British Guild of Travel Writers’ top Globe Award,” said Clare Akamanzi, the acting CEO of the RDB.

“In Nyungwe, we are able to see a combination of tourism, wildlife, environmental and agriculture development, which adds to the beauty as well as create jobs for our people in line with diversification of tourism products. It shows that the potential for interdisciplinary collaboration for sustainable tourism is limitless.”

Based in South-Western Rwanda, Nyungwe National Park is home to 25 percent of Africa’s primates. Other major award winners included UK’s Cutty Sark Restoration and France’s Loire à Vélo Cycle Trail. Rwanda Tourism continues to be the country’s major cash cow after coffee, tea and mining, with revenues increasing by 11 percent between January and June this year compared to the same period last year.

The increase is indicated by US$128.3m generated from the sector between January and June compared to US$115.6m generated in the same period last year. So far investment projects worth US$184.1m since January 2012 are expected to generate over a thousand jobs. The extremely rare mountain gorillas in the Virunga Mountains continue to be the leading tourism attraction.

There are also Uganda gorilla safaris in Bwindi National Park, southwestern Uganda. Many tourists from all over the world enjoy combining Uganda and Rwanda gorilla tracking experience!